Located deep in the Alpha Quadrant the Maelstrom is a realm of danger and intrigue on the edge of the final frontier. Most of the region seems designed to kill the novice explorer - Stars emit triple the amount of radiation as elsewhere in the galaxy, subspace rifts threaten to rip space apart at the seams, and quantum destabilizations can tear the timeline to pieces. Then there are the political risks of the region, with territories claimed by every major power in the Alpha Quadrant.

Nowhere in the final frontier is as scary as the Maelstrom where one false step could doom an entire galaxy.

When the threat of the Romulan Supernova emerged in the 2380s, the Federation withdrew its forces and left the worlds of the Maelstrom to fend for themselves. After almost two decades of neglect, the Federation has set its sights back upon the Maelstrom as a potential source for energy to power the galaxy into the next century, but what challenges will they face in the far reaches of the final frontier?


This game is a proud member of ZODIAC FLEET 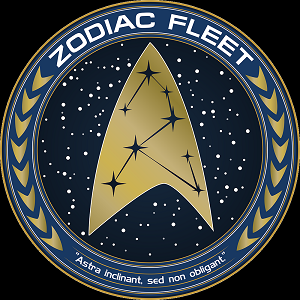 This game has been voluntarily rated:

This game features adult language, sexual content is permitted (with some limitations), and violence may be depicted.

Despite this the game does not permit players under age 18 at present time and reserves the right to implement a trial period on any new players and/or remove players if needed.


Star Trek and all related marks, logos and characters are solely owned by CBS Studios Inc. This fan production is not endorsed by, sponsored by, nor affiliated with CBS, Paramount Pictures, or any other Star Trek franchise, and is a non-commercial fan-made production intended for recreational use. No commercial exhibition or distribution is permitted. No alleged independent rights will be asserted against CBS or Paramount Pictures.

It was early morning, coffee of a human blend sitting at the edge of the Ops table as Iy'dan started to look over the duty reports from the night shift. A cursory glance over showed nothing of note. A few power interruptions as systems and stations were being restored…

» Dinner with the Commodore

What better way for a person to get to know someone than inviting someone to dinner? Vincent was curious about the man who will be running the station, and figuring out a way for himself to be useful. This was a whole new ball of wax but Vincent felt…

The ceremony for the change of command of Deep Space 12 was beautiful. Housed in the center of the Dreagos Memorial Parkland, the entire program was one of pure pomp and circumstance for all who were in attendance. There were the traditional long-winded speeches, holographic fireworks among the simulated twilight,…

Located in the center of the expansive Spacedock-Series Outpost, the Dreagos Memorial Parkland, named in honor of the research and terraforming station lost during the Vesuvi event, was the largest livable location aboard Deep Space 12. A large, domed area the Parkland perfectly mimicked an M-Class world with athletic fields,…

"Captain," Lieutenant Lothaw Zirara called from the Operations Console, "We have an incoming transmission for you from Starfleet Command." The Bolian typed on the small interface, checking the data packets as they crossed through, "it's from the Office of Vice Admiral Gregory MacCray."

Thyr adjusted his uniform and sat up…

Lela was settling in her new quarters aboard the SB Maelstrom, she had a few pictures to put up, and was gonna look at the replicator for some fake plants to put in her quarters to spruce it up some.
She had a window to look out into space which…